Just like I wrote practically a mini love letter to Paris, I could also write one to Rome. These European cities are so beautiful, and it is helped completely by the way they are enshrined in literature, film and other forms of popular culture. I will admit that my first view of Rome was shaped by a film that might not be the most cinematic, but will always be one of my favourite… The Lizzie McGuire Movie. As a nine-year-old girl, I saw it twice at the cinema (having already been a massive Lizzie McGuire fan anyway – I mean, we had the same name and looked reasonably similar with the blonde hair, so it was bound to happen) and I immediately fell in love with the city that Hilary Duff had her epic adventure in. As she got on the Vespa and rode through the streets of Rome, cartwheeled on the Spanish steps and performed possibly one of the catchiest songs in the world at the Colosseum, I knew I had to go at some point. That happened over a decade after I first saw The Lizzie McGuire Movie, but it didn’t mean that I wanted to do the same things as Lizzie any less… though I’m pretty sure that nobody would want to hear me sing (practically tone deaf) on a stage at the Colosseum – but I did have a cheeky picture pretending to be her whilst we were there, so that was enough for me.

When we visited Rome, it was a lovely sunny week in January. It wasn’t that busy, but it was beautiful, with early evening sunsets and mild temperatures that made it perfect for us to have our own Roman Holiday, to live our own La Dolce Vita and explore this passionate Italian city. I was absolutely desperate to see the Vatican City and the Sistine Chapel, alongside other experiences I graded necessary such as sample delicious Italian food and stroll through the gorgeous piazzas. There is an important point I need to make: I love food – sorry, make that Italian food – as much as I love art and history. So I knew Rome would be a brilliant place to combine all of this, whilst also pretending to be Lizzie McGuire in my head and dreaming of being as simply perfect and resplendent as Audrey Hepburn. The top item on my bucket list (in fact, the only item I was dead set on doing) was to eat a lasagne in Italy. I managed this twice during a four day holiday, ate pizza at least once a day, drank copious amounts of my favourite prosecco with my dinner and also sampled the creamiest, loveliest pistachio gelato I have ever tasted. I ate this pistachio gelato whilst listening to a man busking on a bridge across the River Tiber and in the distance could see Michelangelo’s dome on St Peter’s, so it felt like a very magical moment in which everything I had imagined Rome to be intertwined. 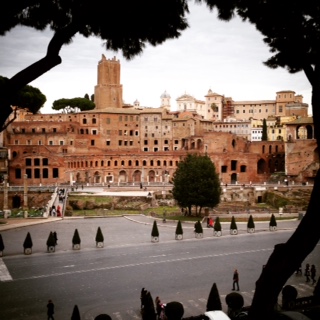 Looking across from Il Vittoriano to Trajan’s Forum

Now I’ve explained my little love affair with Italian food, it’s time to explain more of the romance of the Eternal City. It was like walking through a city-sized, living museum. Ancient stood alongside modern – for instance, when you stood in the Piazza Venezia, you could be facing Il Vittoriano, a late nineteenth-century monument dedicated to the first king of a unified Italy, and by moving your head only slightly could then be facing ancient ruins, and by moving your head again, could be looking upon Renaissance buildings. This combination is electrifying and means that wandering through the streets of Rome could never be tiring, as there are always beautiful Renaissance churches to be spotted, alongside ancient monuments that still cast a lasting presence throughout the city streets.

One of my favourite churches we stumbled across – around the corner from the Pantheon, we found Santa Maria Sopra Minerva Basilica, in the piazza of which was this gorgeous Bernini elephant obelisk!

The other amazing thing I adored about Rome was the way that you could wander into a Church, and happen to stumble across works by some of the most famous artists in the world. For instance, if you happen to wander into the Piazza del Popolo, PLEASE go and have a look inside the Church of Santa Maria del Popolo, where you will find in the narrow Cerasi Chapel Caravaggio’s Crucifixion of St Peter. Dark and dramatic, Caravaggio’s artwork reflects the character of an elusive artist that seemed to be the original man who was mad, bad and dangerous to know. Commissioned as part of the Counter-Reformation effort of the Church, St Peter is shown as highly realistic, an ordinary man whom people could relate to. It is a powerful work that is definitely worth seeing – and cases such as this don’t stop there. Wander into the Church of Santa Maria della Vittoria, not far from Palazzo Barberini and the Via Veneto, and you will find in the Cornaro Chapel Bernini’s controversial and absolutely stunning The Ecstasy of St Teresa – but more on that another time. These churches are so tucked away, yet house some of the most incredibly spiritual works of art that students study all across the world – and they are so accessible for a visitor to find in magical Rome.