An Afternoon in “the Sistine Chapel of Impessionism”

A couple of weeks ago I was fortunate enough to go and stay with one of my best friends who now calls Paris home – I am exceedingly jealous, particularly as when she came to visit me I couldn’t so much offer her strolls down the Champs-Élysées as walks up and down the Avenues close to the University of Hull… We had a brilliant thirty-six hours exploring what is definitely my favourite place in the whole world – not that I’ve seen much of the world, but I don’t think many places could come close to the romance of Paris – including lots of places I’d never been before. One of these places was the beautiful Musée de l’Orangerie, which you can reach after a lovely stroll through the Jardin de Tuileries towards Place de la Concorde, and then go and sit inside and marvel at the beautiful Nymphéas, or Water Lilies.

Despite loving Impressionism and having studied French Art, I hadn’t realised that these beautiful panoramas, stretching across emphatic white walls in two elliptical rooms that are perfectly lit to show off the gorgeous rich colours Monet is so known for, were actually completed across three decades, beginning in the 1890s and ending with Monet’s death at the age of eighty-six in 1926. He began toying with the ideas of the series in the 1890s but after the deaths of his second wife Alice (previously the wife of one of his patrons, Ernest Hoschedé, they married in 1892) in 1911 and his son Jean in 1914, resumed work in his huge garden studio at Giverny. Monet actually offered them as a monument to peace on November 12th 1918, the day after the Armistice and end of World War One. So this is long after the heyday of Impressionism, which reigned across eight anti-establishment exhibitions between 1874 and 1886, but was referred to in a 1952 article by André Masson as

“the Sistine Chapel of Impressionism” 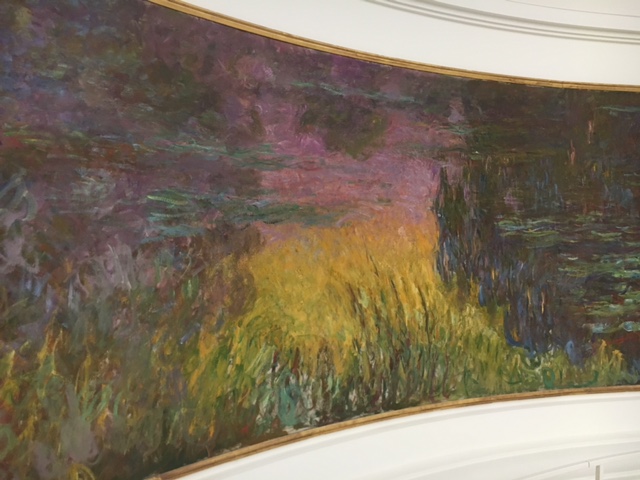 Monet is perhaps the most well-known of the Impressionists; in fact, it is Monet’s 1872 painting Impression, Sunrise which gave the movement its name. Before this, they were known perhaps scornfully as the Intransigents (a label which had political connotations contrary to the aims of much of Impressionist painting – though it could be argued that Impressionism as an artistic movement is more political than meets the eye, but that’s another avenue to explore at a different time), a label they were keen to get rid of, so by 1877 they were known as the Impressionists. Quite simply, their work aimed to catch an initial impression, with their raw, sketchy brush strokes (facilitated by new, flat-ended brushes) evocative of the idea of capturing the transitory and their practice of working outside, en plein air, direct from nature. This broke the conventions of the Salon, which was increasingly repressive following the Paris Commune of 1871, wanting artists to celebrate a collective French vision rather than individual sensations. They were searching for the new modern art; critic Charles Baudelaire had advised that

“modernity is the transitory, the fleeting, the contingent” 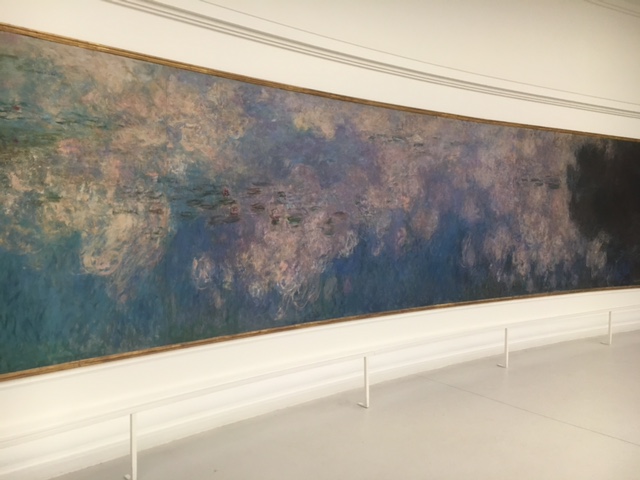 Monet’s work, and this includes the huge Water Lilies, which cover a space of nearly a hundred metres long and 1.97 metres tall, was constructed in terms of colour, with high viewpoints and indeterminate outlines, the focus being light and atmosphere at a particular time, a fleeting moment which he chose to record. Monet commented of his Water Lilies that they had an

“illusion of an endless whole, of a wave with no horizon and no shore”

When you walk into the specially designed space in the museum which holds the paintings, this is exactly the impression you have. Walking next to them feels like you are staring into water, expecting to see your own reflection, or observing the vegetation and weeping willows at the water’s edge. It is incredibly romantic, and the colours were like nothing I’d ever seen before – so rich, dark and vibrant. In some ways, it did feel akin to the intense colour that surrounds you in the Sistine Chapel in Rome, and there is also the same spine-tingling feeling of knowing you are in the company of the work of an artistic genius; the Sistine Chapel has Michelangelo, the Musée de l’Orangerie has Monet. 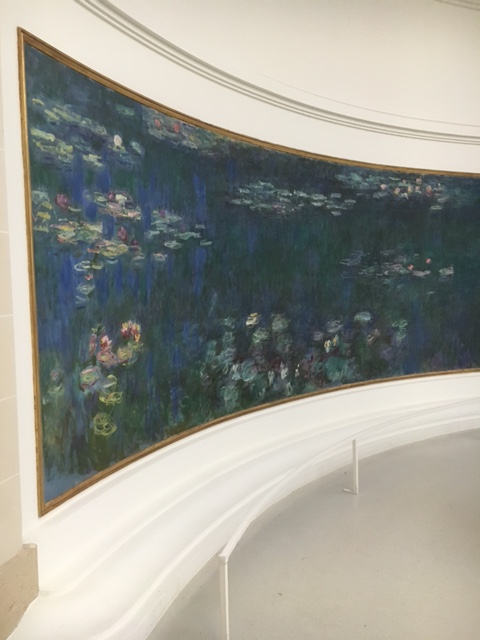 I was reading about the Nymphéa after we visited and something which I thought was so interesting was Monet’s relationship with Georges Clemenceau, who was Prime Minister of France from 1917 to 1920, overseeing World War One and most famously one of ‘The Big Three’ (alongside David Lloyd George, Prime Minister of Britain, and Woodrow Wilson, President of the USA) at the Treaty of Versailles. Monet and Clemenceau were friends, having first met in 1860 and then meeting again nearly half a century later in 1908, sharing interests in republicanism and the arts. It was Clemenceau who Monet wrote to on November 12th 1918 offering the panels. This offer became official two years later, (with the original location declared in 1920 to be in a Government-built pavilion in the grounds of the Hôtel Biron, now Musée Rodin, but in 1921 this changed to the Orangerie) and two years after that in 1922 Monet signed a contract gifting nineteen panels to the state. However, his perennial dissatisfaction with his work meant that Clemenceau was left to advise the display after Monet’s death, completely complying with Monet’s design of the visitor experience. Despite holding on to the murals, Monet completed most of the work between approximately 1916 and 1921, creating the oval-shaped scheme experienced in the gallery by putting his large canvases on moving easels so he could visualise the whole. The elliptical rooms in the Orangerie were designed by the architect Camille Lefèvre, and were first opened to visitiors on the 16th May 1927. I think it’s really interesting that Monet designed the visitor space, which is so serene that it highlights the beautiful vibrant colours and sketchy Impressionist style that Monet is so renowned for; Joel Isaacson perfectly sums this up:

“Here the changeable, fragile environment of Giverny, created and nurtured by Monet over a period of almost 50 years, is given its synoptic form in paint.”

It’s a must visit in beautiful Paris!

Things I tell myself are “vital” before hoovering the house ready for visitors: making infinite (novice) flower arrangements 💐 also please enjoy the reflection of @robgilbertuk’s aeroplane poster he is so proud of!
Pretending it’s not a million degrees outside and that I don’t have approximately thirty mosquito bites en route to wine time 🥂 (basically an excuse to show off my new @oliveandsiena earrings which I’ve been surgically attached to since they arrived a week ago) 🤍
Charlotte in Charlottesville 🖌
Almost heaven… (sorry, couldn’t resist…)
2022 and 2017… almost exactly five years apart. When I spent a summer as a museum intern in Virginia, I would never have predicted that five years later I’d be living in the US (and that I’d make @robgilbertuk drive with me across three states for a weekend trip and think that was a very acceptable distance). If nothing else, this proves I can tan a slight bit. And it was lovely to revisit Maymont and retrace my steps 🌿
Cataloguing but simultaneously thinking about how to pick the right lottery numbers so I can buy a house full of antiques 🏠