Sudbury Hall will always be one of my favourite country houses to visit as it is so close to home (it is another lovely Derbyshire country house), so I have very vivid memories of visiting (including a school trip when I was five in which I fell in love with this 1920 portrait of Violet, Lady Vernon, wearing a beautiful salmon pink dress and holding a matching ostrich feather).

Home of the Vernon family right up until the 1960s, it was transferred into the care of the National Trust in 1967 and to celebrate the fiftieth anniversary of this, the presentation of Sudbury Hall has been completely changed for this year, to see the house in a new way and how the Trust made decisions about presenting it to the public. This is very exciting and definitely warranted a post about my recent visit!

I really love this new presentation of the house: parts of the house previously open have been closed in accordance to what the Trust were presented with when they took it over, and existing visitor route has been temporarily stopped so that visitors can freely walk around in whichever order they choose. There are lots of different and exciting things on display, but perhaps one of the most exciting things is that a lot of the furniture has been covered, so that the interior of the house is now taking centre stage. This includes beautiful carvings by Grinling Gibbons and the stunning staircase which was carved by Peirce, Bradbury and Pettifer. The staircase really is something to marvel at: the final bill was £112 15s 5d, worth almost £9,500 in the twenty-first century! The ceiling paintings were completed by Louis Laguerre, who also completed a mural in the Great Hall. By stripping back the interior, it gives visitors a chance to really look at the fabric of the house: more and more parts of it will open throughout the year, including more access to the basement than ever before, which will be really exciting (the kitchen and the billiards room down there are really impressive). 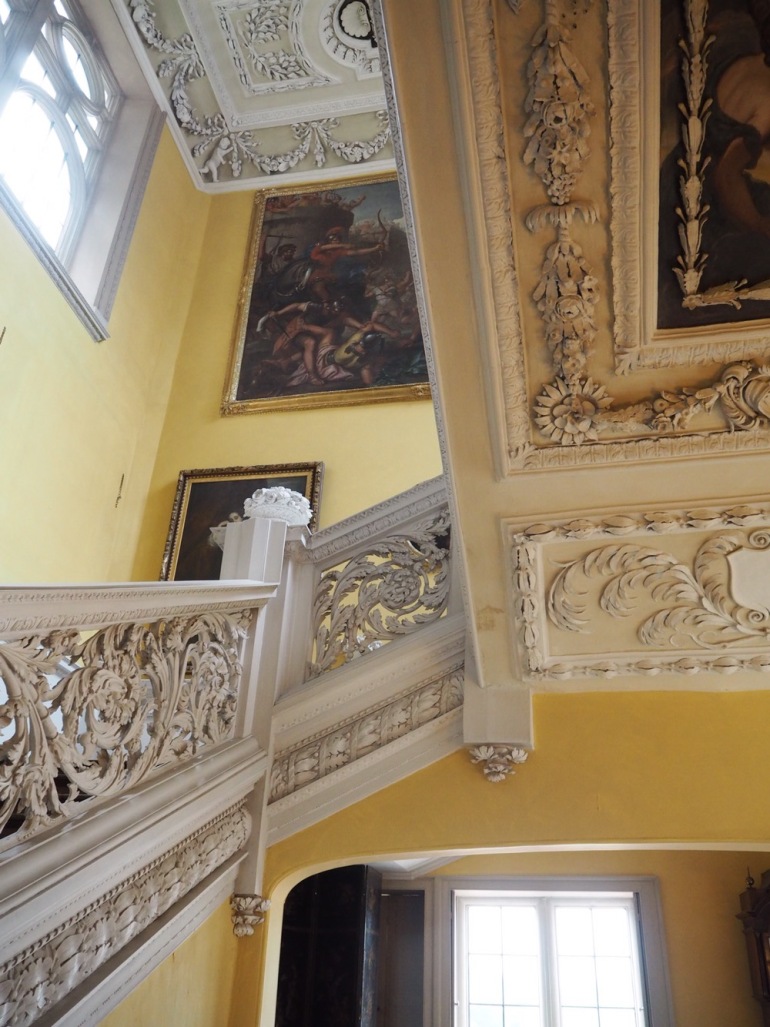 The present Sudbury Hall was built by George Vernon, who was twenty-five years old when he inherited the Sudbury estate in 1660 – it is quite probable that the house was done to his own design. This year was significant not only for George (who also married the heiress Margaret Onley in 1660), but for England as a whole, as the monarchy was Restored with Charles II ascending to the throne following the end of the Cromwellian Protectorate. The exterior of the house reflected this, looking Jacobean yet taking inspiration from the city churches of Sir Christopher Wren. George was married three times (to Margaret, Dorothea Shirley and Catherine Vernon, who, at only eighteen upon their marriage, was almost thirty years younger than him!) and had fifteen children, but only one survived him, Henry, son of Catherine, George’s youngest wife. Henry seemed to follow in his father’s footsteps with marrying heiresses – many of the portraits of these interesting men and women can be found in the Long Gallery at Sudbury.

I can’t ignore the beautiful portraits in the Long Gallery. It was an old-fashioned addition to the house, but is so light and a perfect place for a portrait gallery to reside, highlighting in one  place family connections and illustrious lineage. I wanted to pick out some of my favourites (and some of the great stories a really lovely room guide told me on our last visit!). Three I absolutely love are of Charles II’s mistresses (Charles II will always be my favourite monarch), Nell Gwyn, Barbara Villers and Louise de Kéroualle, the first two after Sir Peter Lely and the final one possibly by Sir Godfrey Kneller. There are also quite a few portraits by or in the style of John Michael Wright, who is relatively forgotten about compared to the aforementioned Lely and Kneller during this period. Wright painted the famous portrait of Charles II at Hampton Court of him sat in full regalia on a throne. He trained in Edinburgh and spent time in Rome, and because of this experience, was often given commissions by aristocratic and royal patrons.

Wright painted this brilliant portrait of Sir Robert Shirley, who was brother of George Vernon’s second wife Dorothea, in 1671. (Both (c) National Trust). I firstly really liked his hair in this portrait (it definitely looks like he has had a seventeenth-century perm) but also an unbelievable story that Robert fathered fifty-seven children – and twenty-seven of them were legitimate! His poor first wife, Elizabeth Washington, (whom he married in 1671 when he was twenty-one and she sixteen years old), gave birth to seventeen children. Her portrait, painted after Wright, has a commanding presence (with undoubtable classical references) and the blue, gold and cream of her dress and the draped material across the bottom match very nicely to the clothing her husband is wearing. However, it can’t be denied that Elizabeth looks very pale: though fashionable, it is not hard to imagine that having so many children must have made her quite tired!

I also love this portrait of George Vernon by Wright: the room guide pointed out to me that he looks quite like Richard Gere, and I definitely think it makes George look like the quintessential seventeenth-century heart throb! 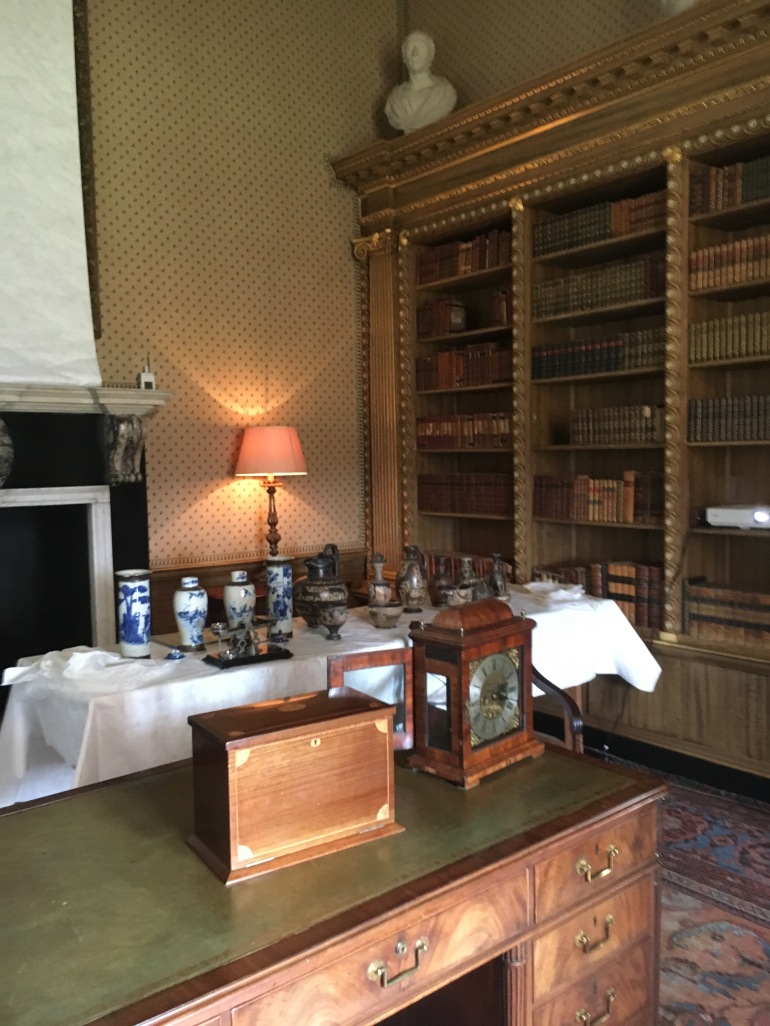 You might recognise some of the parts of Sudbury Hall even if you haven’t been there: a significant amount of the interior was used as Pemberley in the 1995 adaptation of Pride and Prejudice (my favourite costume drama adaptation ever). The Library and the Saloon are shown to Elizabeth Bennet and her Aunt and Uncle Gardner by the housekeeper, also used in other parts where Darcy and his guests are being entertained by Georgiana playing on the piano. When Darcy walks with his dogs through the Long Gallery in the middle of the night with a candle, he walks through the Sudbury Long Gallery, and down the beautiful plasterwork stair case. It is at the bottom of these stairs that Elizabeth looks at the portrait miniatures of Darcy and Wickham. So whilst Lyme Park stood for the breath-taking exterior of Pemberley, Sudbury Hall was the interior. This is perhaps very appropriate due to Sudbury’s Derbyshire location: Jane Austen located Pemberley in Derbyshire, but Lyme Park is actually near Manchester!

There are plenty of other things to do at Sudbury as well! There is a huge Museum of Childhood, which has some really great galleries including a schoolroom and work for children right from the Victorian age (also a Toys room, which has some things in that I had, which made me feel very old!). There is also a great book collection which is a great chance to reminisce about what you used to love reading as a child.

Also, it would not be a country house visit without a trip to the tea room! Sudbury’s is really good and I had this great scone and tea whilst we were there (there were lots of delicious-looking cakes on offer as well, it took a lot of restraint just to have to scone!).

Check out https://www.nationaltrust.org.uk/sudbury-hall-and-the-national-trust-museum-of-childhood for opening times!

(All portraits copyright to the National Trust).