I’ve made no secret of the fact I love visiting the National Gallery in London. In fact, my favourite place to visit in any city tends to be the art gallery, particularly if it’s a national collection. I was lucky enough to spend my first Saturday in America (I spent three months in Virginia during the summer of 2017 working as a curatorial intern, but more on that later!) in Washington DC, with my lovely friend and tour guide taking me to spend the day in the National Gallery of Art. 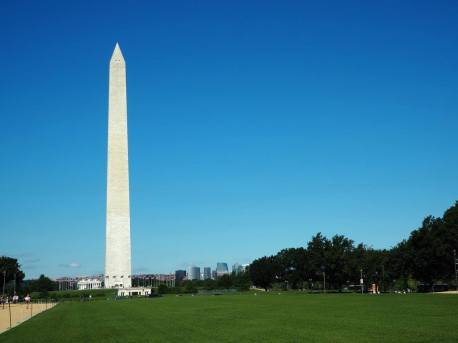 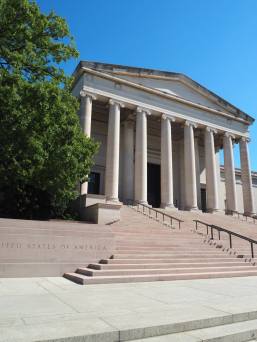 First thing to mention is that it is on the Mall, which is absolutely beautiful. It’s a long avenue of museums, home of the Smithsonian, which runs from the US Capitol (which looks a little like St Paul’s Cathedral in London sitting on top of an Italian palazzo) all the way through the Washington Monument to the pièce de resistance, the Lincoln Memorial. 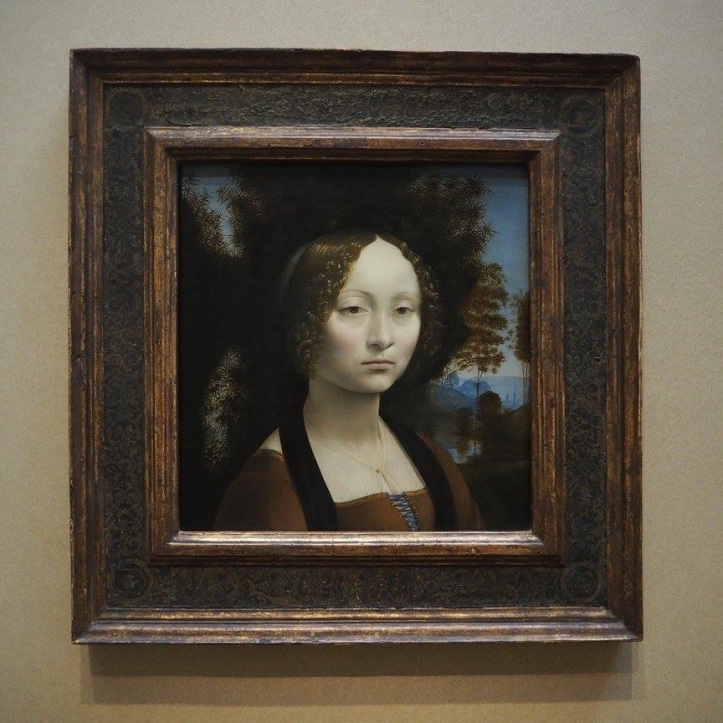 Probably the first piece of art I should highlight is a Leonardo da Vinci. It’s beautiful, it’s dainty, double-sided, and you can get right up close to it to have a good look. It is his portrait of Ginevra de’ Benci, c.1474-8, and I think it is arguably more beautiful than the Mona Lisa. The colours are a lot cooler, and the blue background with the juniper bush – alluding to her name – makes for a beautiful contrast with the pearliness of the sitter’s skin. It is possible that this was painted upon the occasion of her marriage to Luigi Niccolini in 1474. The reverse of the painting is also really interesting, which again you can get close to: it is entitled Wreath of Laurel, Palm, and Juniper with a Scroll inscribed Virtutem Forma Decorat. The motto given to Ginevra here is “Beauty adorns virtue”. Leonardo painted this when he was only twenty-one years old, which is pretty astonishing: somebody wrote of this painting at the time that he 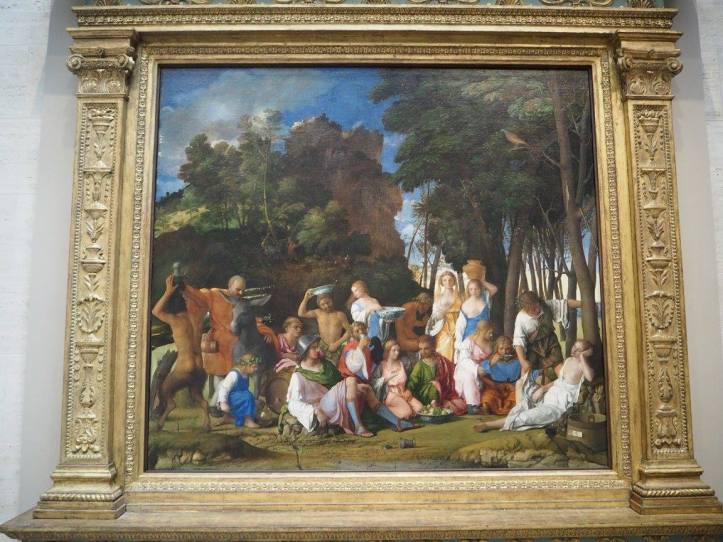 Not too far away is Giovanni Bellini’s Feast of the Gods, completed in 1514 but later worked upon by Dosso Dossi and more famously Titian in 1529. You can immediately tell it is by (more than one) Venetian artist: the colour leaps out as we see the Gods, from a scene in Ovid’s Fasti, enjoying a feast. This was painted for Alfonso D’Este, the Duke of Ferrara, who began preparing the room where a series of mythical paintings were to go in 1505. Following the end of war in 1513, d’Este looked to Bellini to do this: at this point, Titian was an unknown artist, despite the fact that he was later intimately involved with this project. (His Bacchus and Ariadne in London’s National Gallery was for this very same room). Feast of the Gods is a great painting to sit in front of and look at all the small details that are happening, because several things are going on amongst the drunk and happy revellers and the nymphs and satyrs who are serving them.

If you like Italian High Renaissance, don’t forget to check out Raphael’s Alba Madonnafrom c.1510, a beautiful round painting with delicate colours. Painted after the artist arrived in Rome, it shows John the Baptist handing Christ a cross, all with a soft and dreamy landscape behind it.

Creeping forward in time by about 350 years, what I would say absolutely cannot be missed is Degas’ Little Dancer Aged Fourteen. I’ve previously written about this elsewhere, but what is special here is that this is the original, right from the Mellon collection. First exhibited at the sixth Impressionist Exhibition in 1881, many hated it because the little dancer shown seemed so real. I think it is the realness of her – right down to her human hair, tutu and corset – that makes this so beautiful. I’ve seen some of the bronze casts of this, but this was amazing, and, in my opinion, one of the jewels in the crown of the NGA collection. 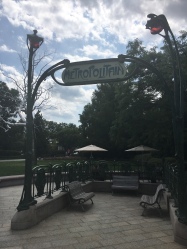 Saturday morning painting and planning 🖌🌸
Is #femaleartistfriday a thing? If it is, I’m joining in! This painting by Lilla Cabot Perry caught my attention a long while ago at the San Diego Museum of Art - I love the flowers and the beautiful blue kimono so much!⠀
Sunset over the marshes 🌿
Savannah love locks on Factors Walk 🔒❤️
Good morning from me, the blurred out Forsyth Fountain (thank you portrait mode for smoothing out me and the background!) and my humungous hair ⛲️
Wallpaper appreciation post for Davenport House! These are all taken from 1820s wallpaper designs and created using authentic techniques for the museum. My favourite is the first one: it reminds me of a cross between Wedgwood and toile de jouy fabric - a dream combination!