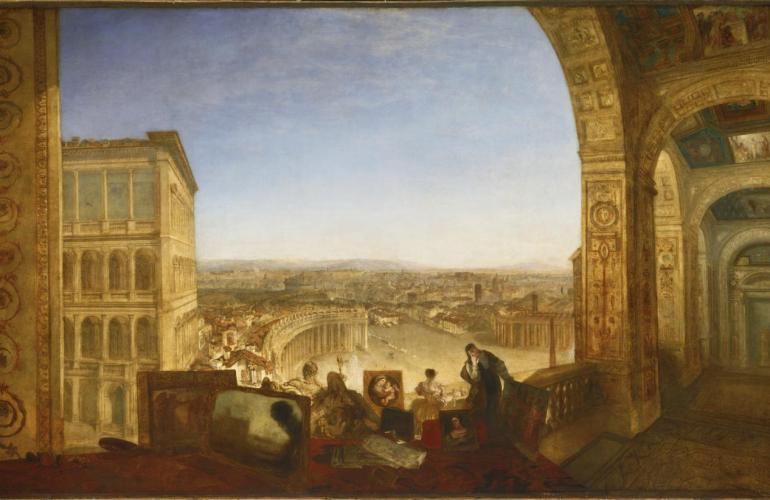 Rome, from the Vatican. Raffaelle, Accompanied by La Fornarina, Preparing his Pictures for the Decoration of the Loggia by J. M. W. Turner, exhibited 1820, oil on canvas (Tate Britain, N00503)

For the three hundredth anniversary of Raphael’s death, which occurred on Good Friday in 1520 (supposedly the artist’s thirty-seventh birthday), J. M. W. Turner exhibited this beautiful painting of Raphael and the woman who was reputedly the love of his life, his model and the star of La Fornarina, looking across Rome from the Vatican. Here Turner shows a romantic vision of the Renaissance great preparing to execute his famous decorative schemes along the loggia, with La Fornarina by his side. His famous round painting Madonna della sedia (or seggiola) can be seen leaning against the balustrade. It not only romanticises Renaissance Rome, in this grand landscape vision and the artist’s genius through work and practice, but also – and what I’m most interested in here – his relationship with La Fornarina.

When thinking and discussing the artists of the Renaissance, Raphael is undoubtedly set apart by his enduring reputation as an insatiable lover of women. The first art historian, Giorgio Vasari (who was alive at the same time of many of the artists he discussed), focussed on it, writing in his Lives of the Artists:

“Raphael was a very amorous person and very affectionate to women, whom he was always ready to serve.”

Vasari also writes of the almost legendary cause of Raphael’s death – that he was killed by overenthusiastic lovemaking. Vasari commented:

“And keeping on like this in his amorous pleasures, having one time debauched himself more than usual, he returned home in an extreme fever and the doctors thought he was too hot.”

Many have concluded that he actually died from being bled too much and from the weakness this resulted in, but this hasn’t stopped the most sensational and scandalous part of the story being what is immediately called to mind. He did also supposedly leave money on his deathbed to his mistress, so that she could live a comfortable life.

It is with this enduring reputation that we can turn to La Fornarina. Painted around 1518-20, it is an undeniably beautiful portrait of a dark-haired, pink-cheeked and soft-skinned woman, she holds a veil up to unsuccessfully protect her modesty, looking to the artist as she proudly wears a band around her arm proclaiming his name. This in itself is a statement beyond the artist’s signature on his painting: she is his. She is seated outside in front of a myrtle bush, her hair wrapped in a scarf and a single pearl adorning it.

La Fornarina translates as The Baker’s Daughter, who many throughout history have named as Margherita Luti; yet recent work on Raphael doesn’t mention Margherita’s name, primarily because a lot of the relationship between Raphael and La Fornarina is steeped in hearsay and tradition, rather than fact. Perhaps it is this that gave rise to Turner’s picture: the Romantics loved the story of the artist and his muse, and the subject was also taken up by the French artist Ingres and also later (and perhaps in the most crude way) by Picasso.

La Fornarina is supposed to have also sat for another portrait, completed about three years previously, La Donna Velata, or just La Velata. Though this is sometimes disputed, there is an undeniable similarity between the two dark haired women, and the pearl brooch in her hair is in exactly the same place as in the later portrait. It has been suggested that this indicates something she might wear on her wedding day, adding further mystery to La Fornarina and Margherita, and her relationship with Raphael. Yet there is nothing that can be concluded factually from this, which is perhaps why their relationship is so romanticised.

Another episode in the Raphael and La Fornarina story is that of when he was painting frescoes in the Villa Farnesina for his friend, the banker Agostino Chigi, around 1511. Here Raphael was painting The Triumph of Galatea, but was so distracted by his love for a woman, suggested to be Margherita, that Chigi had her installed at his villa with the artist, so that he could be near her and work simultaneously.

It is also worth mentioning that Raphael was engaged: he turned down an offer from a family member to set him up with someone from home, and then became betrothed to the niece of Cardinal Bibbiena, Maria. However, Raphael and Maria were engaged for seven years without the marriage ever coming to fruition. Some said that this was because he had the potential offer of becoming a Cardinal, or was it his never-ending affairs, or his love for the baker’s daughter? No-one will perhaps ever know, but there is something endlessly romantic about the speculation.