Exploring Montréal: the Mountain, Poutine and the Old Town

I’ve already posted about our trip to the Montréal Museum of Fine Arts, which is now officially one of my favourite art museums of all time – read about it and the beautiful spaces inside here. We spent a whirlwind forty-eight hours in Montréal, which is a stunning city with so much to do, so this post is about my highlights from our quick stop in a city I think I definitely need to come back to… 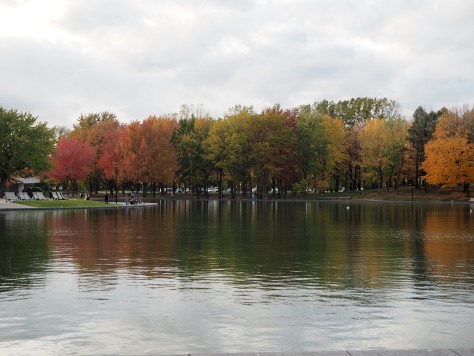 Mount Royal, from which Montréal gets its name, is the best place to look out across the city.

Because we visited in the autumn, the colours of the trees were so intense and beautiful, and at one point, it truly felt like we were just surrounded by golden leaves as they were on the ground, around us and above us on the trees. It was so hard to capture this on camera to remember! 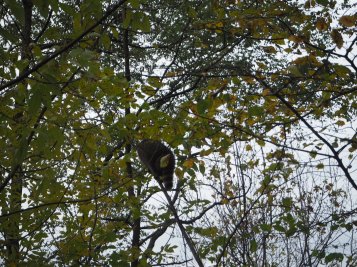 It is definitely worth the walk up, and we headed to the Mount Royal Chalet which has a great look out spot in front of it. There are so many paths and trails, it is wonderful to get a little lost amongst nature, but in the heart of the city. Also we spotted a raccoon, which was quite exciting for two people from the UK!

On the walk down, we stumbled across an amazing Mexican place called Tacos et Tortas on Rue Rachel O. The food and the cocktails were to die for, I’d definitely recommend it!

Perhaps the most major street running through Montréal, this is definitely worth a wander round. There were so many cool shops, bars and restaurants along here. It is also a gateway to exploring some of the different neighbourhoods of Montréal. We also had our first taste of poutine on a late walk here at Patati Patata, which was absolutely delicious.

The streets of Old Montréal were SO beautiful, and definitely highlight French culture. I kept taking photos of all the random side streets and shop windows – there were so many nice-looking places to eat and also lots of art galleries. Definitely a place for some window shopping! We had a wonderful lunch (with great wine, because, when on holiday…) at Restaurant Papillon.

Two exceptionally beautiful buildings to see in Old Montréal (besides all the rest of course) were Montréal City Hall and Notre-Dame Basilica. The City Hall looks out onto Place Jacques-Cartier, which will lead you down to the waterfront and park space. Notre-Dame is in a lovely square. The first Notre-Dame church here was built in the 1670s, which was eventually demolished 150 years later as it became too small. Construction on the new church began in 1824, and parts of the church were completed in various stages, finishing with the completion of the decorations inside in 1880.

Being a Barbie Girl

Finally, perhaps the quirkiest thing we did in Montréal… I found this trawling through the internet-recommended lists of things to do in the city, and knew we had to visit, even if just to satisfy my childhood self, who adored Barbie. In Les Cours Mont-Royal, a shopping centre in Downtown Montréal, you will find the Barbie Expo. Free to go in, this is the largest permanent exhibition of Barbies in the world. I fully expected just the kind of Barbie dolls I remember from when I was younger, but what I found was a collection of Barbie dolls dressed by leading fashion designers, representing various film characters, people and places.

I spent a lot longer here (and took many more photos) than I expected. If you’re into fashion, and perhaps used to love Barbie, then this is definitely one for you. Many members of royal families from around the world were represented – including Grace Kelly in her famous wedding dress. My favourites were probably the Fabergé dolls, the Venetian Opulence doll representing the Venetian Masked Ball and the Doris Day and Rock Hudson dolls (representing one of my favourite films of all time, Pillow Talk). It may be childsplay, but it’s definitely worth a visit!

Took some time away over the weekend and watched my favourite Doris Day in “April in Paris”, which was a joy.
The gorgeous Gingerbread House 🏡
Dream morning cup of tea view…
Thank you Google Photos for reminding me that seven years ago today I was eating pasta, drinking Prosecco and living out my Art History/Lizzie McGuire dreams in Rome 🏟🇮🇹
Apparently I think I’m Mary Delany now… 🥀
Cleo accidentally falling into a Vermeer painting. (You can tell I was dog-sitting last week!❤️)