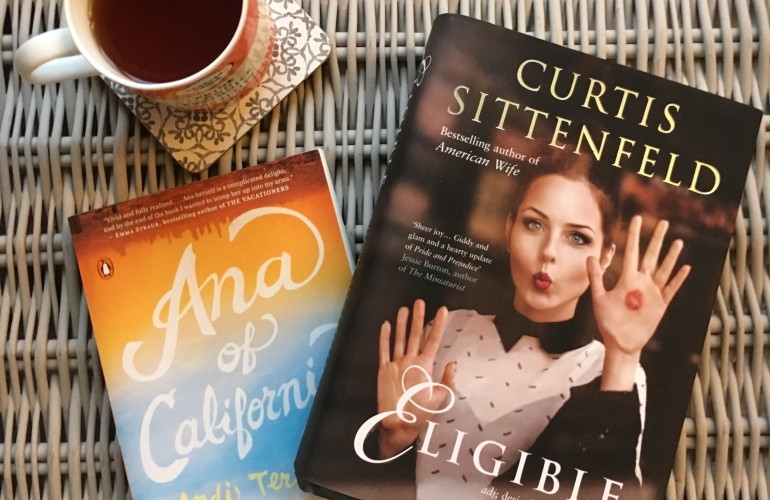 I swear one of my favourite genres of books could be called “modern retellings of classics”. I am always on the lookout for them, in particular Jane Austen retellings, which is why I am hoping that eventually the Austen Project, which paired Austen’s six novels with six contemporary bestselling authors, will eventually resurface with modern editions of Mansfield Park and Persuasion, having done four of the six and then disappearing in a puff of smoke. Recently I’ve been really into reading and re-reading these kinds of books, so I thought I’d share five great modern retellings that I’ve absolutely loved which I hope you’ll enjoy too!

The Rise and Fall of Becky Sharp by Sarra Manning

Perhaps sparked by the recent ITV adaptation, I decided I really wanted to read Vanity Fair and then came across this. Sharp, funny and a clever retelling of the vicious and social climbing Becky Sharp, this was a really enjoyable update of William Makepeace Thackeray’s classic. We meet Becky as a star of Big Brother, about to find out who has won the programme: either Becky or the lovely, kind and soft Amelia Sedley. Becky then does her utmost to cash in on her fifteen minutes of fame and ascend to the heights of London society, constantly revamping herself with each new place she finds herself in, whether it be the Cannes Film Festival or meeting royalty at a charity gala. Rawdon Crawley is as attractive and misused as ever, George Osborne as misguided and Joss Sedley as clumsy, bumbling yet endearing. Becky, of course, is ruthless, manipulative, yet, as she is in the Thackeray original, seemingly likeable.

Persuasion is one of my favourite books of all time (very close second to Pride and Prejudice) and this is a really entertaining, romantic comedy-style telling of the Austen classic. We find modern day Annie Elliot as an accountant, a stable job to make up for her family’s lack of financial awareness, a job which she believes will keep her out of the showbiz spotlight her sisters and father crave. However, Annie then becomes producer on a new adaptation of Pride and Prejudice. Who is cast as Mr Darcy, I hear you asking? Why, none other than Annie’s long-lost love, Austen Wentworth, jobbing-actor-dismissed-by-her-family-turned-Hollywood-superstar. I was so engrossed in this – it’s a really fun, readable retelling that avoids the clunkiness of trying to force the plot into a modern environment and will have you laughing, weeping and rooting for Annie the whole way through.

Ana of California by Andi Teran

When this popped up on my Amazon suggestions, I was so excited. I absolutely love Anne of Green Gables (and, of course, all the TV adaptations, including Netflix’s Anne with an E – read more about that here) so the idea of a modern version was wonderful. Andi Tehran’s book resituates Anne as Ana Cortez, an orphan from East Los Angeles, resurrecting some of the darker elements of her back story occasionally alluded to, who is sent to a farm training programme run by Abbie and Emmett Garber. Teran changes quite a bit of the characterisation, making Diana and Gilbert’s characters, renamed Rye Moon and Cole respectively, much more interesting and multifaceted for a modern retelling. It certainly doesn’t stick to the original, but is a great novel in its own right, taking cues from L. M. Montgomery’s series but reimagining it in a whole new way.

I had to mention a book from the aforementioned Austen Project – this is the last one which was released, 2016’s answer to Pride and Prejudice. Sittenfeld’s version retains most of the original plotline but quite a few things have been changed for contemporary audiences: for instance, no woman aged twenty would be thought of as left on the shelf today, so Sittenfeld resituates Liz Bennet as a woman in her late thirties, and Jane as rapidly approaching her fortieth birthday. Both sisters return to their home in Cincinnati in response to their father’s health scare, and are quickly thrown into the path of Dr Chip Bingley (who has recently starred on the reality dating show Eligible) and Fitzwilliam Darcy, reimagined here as a neurosurgeon. Whilst the paths of Liz and Darcy cross in many more ways than the original Pride and Prejudice, it, like the original, satirises contemporary ideas about love, courtship and money, to hilarious effect. Sittenfeld does a fab job of modernising the tale of mistaken first impressions, and is a great part of the Austen Project.

I loved this so much. Imagine if Jane Austen didn’t die in 1817: instead, her doctor finds the secret to immortal life, so Austen wakes up from the dead. In 1925. This is absolutely fabulous, Jane Austen reimagined as a governess to five girls during the roaring twenties, trying to piece together several romances, and Odiwe even gives Jane one herself. This is a pleasure to read, which not only retells the life and novels of a beloved author but also mixes in various plotlines from her novels. It also really reminded me of Dodie Smith’s I Capture the Castle with the setting of Manberley Castle. Eccentric, romantic and amusing, it made me want to read more of Odiwe’s Austen retellings and sequels.

What are your favourite modern retellings of classic stories? Please comment and let me know, I’m always on the lookout for more! This year I want to make sure I read lots of books for fun alongside my PhD research, so I’m going to start a monthly round up blog post on what I’ve been reading (and possibly watching as well…) – let me know what you think!