Visiting Biltmore, the North Carolina home of the Vanderbilts

Welcome to Biltmore, the spectacular home of the Vanderbilts in Asheville, North Carolina – although it may seem hard to imagine this fairy-tale mansion as a family home, when it has a total of 250 rooms! Ready to see inside? It’s even more impressive than the French chateau-inspired exterior suggests…

Here is one of my favourite spaces in the house… this Banquet Hall shows the sheer splendour and scale of Biltmore. George Vanderbilt began purchasing land in Asheville after a visit in 1888 and, when he had around 125,000 acres, hired Richard Morris Hunt as his lead architect and Frederick Law Olmsted as his landscape architect. He and Hunt travelled to England and France for inspiration (when we arrived we were particularly struck by the similarity of the house to the Rothschild mansion in Buckinghamshire, Waddesdon Manor), but George also spent the several years it took to build Biltmore travelling and buying treasures to fill the house with.

This included these wonderful fifteenth-century Flemish tapestries, which were standout objects amongst the collection at Biltmore to me. What is also wonderful about the house is that almost all of the objects are the originals collected by George and his wife, Edith Stuyvesant Dresser.

Edith and George married in Paris on June 1st 1898 and following a honeymoon in Italy, came home to Biltmore to begin their married lives there. The house had been open to George’s family and friends for almost three years at this point: it took six years to build and George welcomed others there at Christmas in 1895. It was particularly nice that when we visited, the Christmas decorations were still all over the house (and exceptionally beautiful they were!), evoking the magic of this first Christmas spent in the new mansion almost 125 years ago.

As you can tell, I took many photos of the Christmas decorations around the house but mainly because they framed and highlighted some of the things I loved most about the way the house had been designed and the objects in it. For instance, I absolutely adored the fireplaces. Logic dictates that when you have 65 fireplaces in a home, there will be many different designs and styles at play, including ceramics. When we entered the Breakfast Room (with the table dressed for a sumptuous Gilded Age feast) my eyes were drawn to the fantastic Wedgwood fireplace in the beautiful blue and white. The light fireplace contrasts brilliantly with the darker wallpapers and furniture in the room, as well as the beautiful moulding of the ceiling.

On the way to the library, I was struck by the beautiful colours on the chimney breast above this fireplace. It very much made me feel like I was in a sixteenth- or seventeenth-century British country house!

Look at this fantastic print above the fireplace in the Music Room – I wish I could have got closer to have a proper look (and a better photo!). The whole house was filled with a fantastic art collection, but prints and mezzotints in particular. Upstairs we walked along corridors lined with them, including portraits of all manner of British and French aristocracy. In fact, during World War Two, art from the National Gallery in Washington was stored in the house.

This was my absolute favourite – porcelain with flowers. I’ve never seen anything like it before and was really struck with it.

So I’ve shown you inside some of the special spaces within the house, but now to show you why Biltmore was positioned where it is…

LOOK AT THAT VIEW. Isn’t it incredible? The Smoky Mountains look so beautiful. It was a cold but sunny day and as we walked along the terrace, we could see exactly why George Vanderbilt fell in love with Asheville, and why it was the perfect spot to set up home and entertain many guests. 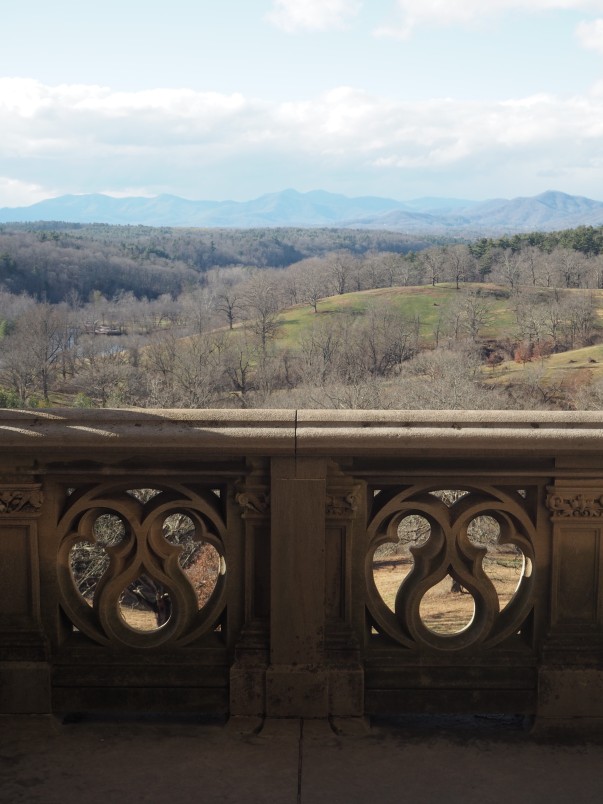 So Biltmore may have been a home, but in Gilded Age fashion, it was a home that impresses at every turn and certainly could accommodate the entertaining of many guests. Besides the fact that it was built with state-of-the-art electricity, hot water and central heating, it had many spaces which could definitely designate it a party house, as well as huge staff quarters that could facilitate all the pomp and ceremony of early twentieth-century high society gatherings. 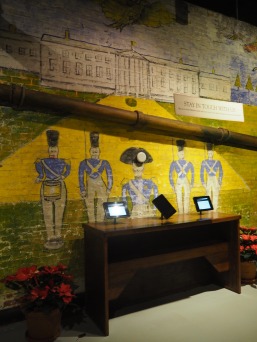 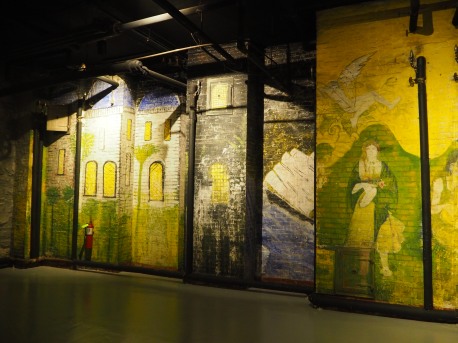 Biltmore literally has a party basement that was painted by its owners for a New Years’ party, as well as a bowling alley and huge indoor swimming pool with a changing area that is nicer than anything I’ve ever seen before. Isn’t it crazy? The more rooms we walked through (and you can see a huge proportion of the house), the more it hit home how much money George Vanderbilt had and ploughed into the building of his dream home. This also included the building of a model village at Biltmore for estate workers – the children of whom all received Christmas presents from George Vanderbilt.

Biltmore is certainly a special place – and one which felt like an American Downton Abbey on a grand scale, which is particularly appropriate seeing as the estate is currently showing a brilliant Downton Abbey exhibition. The full estate includes hotels, restaurants, shopping, wonderful gardens and even a winery – we definitely made sure to go tasting there! It was a vision on a grand scale when it was first built, and is still one now – and one worth visiting. Find out more about visiting Biltmore here. The Downton Abbey Exhibition is running until April 7th 2020… if you’re a fan of the TV series (and we are, and have started re-watching it from the beginning since we got back), I definitely recommend going!

Me dreaming of when it’s coat weather in Savannah…
Happy birthday @robgilbertuk ❤️ you are quite frankly an angel (even if you refused to jump in the lake…), and this is a great chance to look at the beautiful Lyme again!!
Okay, last pictures of the Breakers… opulence, opulence, a lot of opulence!
It’s been so exciting and interesting to be part of @davenporthousemuseum’s annual October Yellow Fever programme, even if this was my first time acting since I was four years old and played the part of “Upsy-Daisy-Angel” in the nativity play and refused to say my lines because I was too scared (hahaha - child actors are very unreliable?!). I especially loved getting to dress up and wear a bonnet 👒 here’s me pontificating about spirits and the soul…
One of the most impressive spaces at the Breakers is the Great Hall - it was meant to be like a Renaissance courtyard, with the ceiling mimicking the sky.
Me, taking photos of every little detail of the Newport Mansions… which hilariously were known as “summer cottages”… lol if that’s a cottage my house is a tiny shed… 🕰