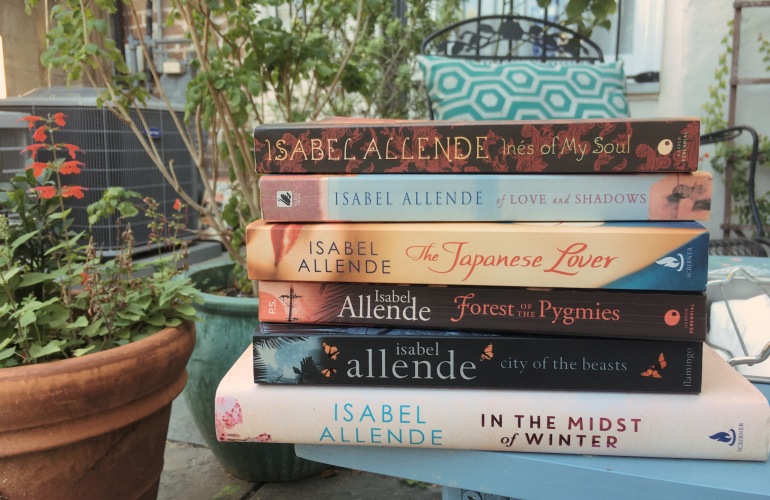 Today in my Reading Women series for Women’s History Month, I wanted to spotlight a female author that I love and teaches me something completely new with each book I read. Isabel Allende is a Chilean-American feminist author and journalist who has written over twenty books which evoke culture, social justice, politics, personal history and the world of women. She has won many awards, including the Presidential Medal of Freedom in November 2014. She is also cool enough to have a cameo in one of my favourite shows, Jane the Virgin, playing herself when the main character, Jane, realises her dream of becoming a published author. (Obviously not her top achievement, but I jumped for joy when I saw her pop up in that bookshop!)

The first time I encountered the work of Isabel Allende was when I was seventeen, looking to write something about love in fiction for my English Literature A-Level coursework (the theme of course surprising nobody). I wanted to write about literary devices of real vs imagined love, and my English teacher suggested reading Isabel Allende’s Daughter of Fortune. I’d never heard of Allende before but eagerly set off to Waterstones, picked up a copy and was immediately entranced. By the story, by Eliza’s journey, by the romance between her and Joaquin and the deep, slow-burning love between her and Tao. Ultimately, by Allende’s writing and her magical realism. Since then, I’ve picked up any copy of her books that I’ve come across – to the point where I once got so excited that somebody had donated several Allende books to the Oxfam bookshop near my university I ended up buying the same one twice accidentally.

Allende was born into an incredibly interesting family, whose stories and lives have often influenced the tales within her books. She is honest in interviews about her life path: she worked as a journalist for a feminist magazine, determined to work partly because her mother didn’t, and she wanted the options that her mother never had (this is always said in interviews with the utmost respect and admiration for her mother). Not only was Allende born in Lima, Peru, where her father was Chile’s ambassador to Peru (before he walked out on his wife and children), but her uncle was the President of Chile, Salvador Allende. He was assassinated in a military coup in 1973. Allende, along with her first husband and children, fled to Venezuela where she began to write her first novel, The House of the Spirits.

I find the story of her writing The House of the Spirits, and how it has influenced her writing practice, so interesting, if heart breaking. Her literary debut grew out of a phone call she received on the eighth of January 1981. Her grandfather was dying, and she would not be able to get back to Chile to see him. Allende began to write a farewell letter to him, which grew and grew into The House of the Spirits. It was an instant success upon publication, so Allende keeps the date of January the eighth as her start date for every novel. As she told Time magazine:

“I love the work in progress. I love to tell a story. I still write on the same computer in the same place, the same stories. I always start on January the 8th. It’s discipline. If I didn’t have a time to start, I would be procrastinating forever.”[1]

Similarly, her novel Paula, which Allende says still gets the most response from any book she has ever written, began in tragic circumstances with the death of her young daughter. Paula is Allende’s daughter, who spent months in a coma with her family watching over her. She was only twenty-nine years old. Over the time Paula was in a coma, Allende wrote letters to her daughter, telling her stories of her family, confessions and anecdotes. It is autobiographical but also reveals the stories that populate Allende’s other novels, that influence character and adventure. Not only did Paula inspire this book, but also the founding of Allende’s charitable foundation, which works with women and girls to secure their economic independence, reproductive rights and ability to live free of violence (see the Isabel Allende Foundation here). Paula is next on my list of Allende’s books to read – I seem not to have read them in order but picked and chosen them as I found them in book shops ever since I first picked up Daughter of Fortune almost ten years ago.

I love Allende’s books because it’s impossible not to get swept up in the story writing. They are beautifully researched, full of complex characters and span generations in the compelling way family and historical sagas do. Her use of magical realism allows her to make political comment, be subversive and raise interesting questions, as well as create all-encompassing worlds. What I find completely magical about her writing process and how her stories come to be, is that Allende will spend a long time researching with sketches of characters in mind, but she often sits down just with a brief idea in her head, allowing the characters and the events of the book to take shape as she writes. The story and the characters meander wherever she feels they need to go. I wish I had that kind of skill – I feel like I can’t sit down to write anything if I have no idea what it’s going to be, the point it is going to make and what it will include (maybe that is my problem!).

And of her purpose in writing, Allende told Mitzi Rapkin:

“I love telling stories. I like to write and never thought that I could be a writer because the only women writers that I knew about were all some old British spinsters that had died and had committed suicide. The rest were just males; the great boom of Latin American literature was a bunch of men. There were no women there, so I never thought that I would be a writer but I could be a journalist. I found a job in a feminine, very avant-garde magazine that started to deal with feminism early on when it wasn’t an issue in Chile yet. I had found my perfect niche, and that’s how I began writing. I wasn’t thinking that I was giving a voice to women. It was just random energy and the wish – the desire – to change everything, to change the society, the culture, the religion, everything.”[2]

Allende has summaries and excerpts of all her books on her website, which allow you to dip your toe into her writing. I last read The Japanese Lover, which was heart-wrenching and wonderful and educational all in one – find an excerpt of that here.