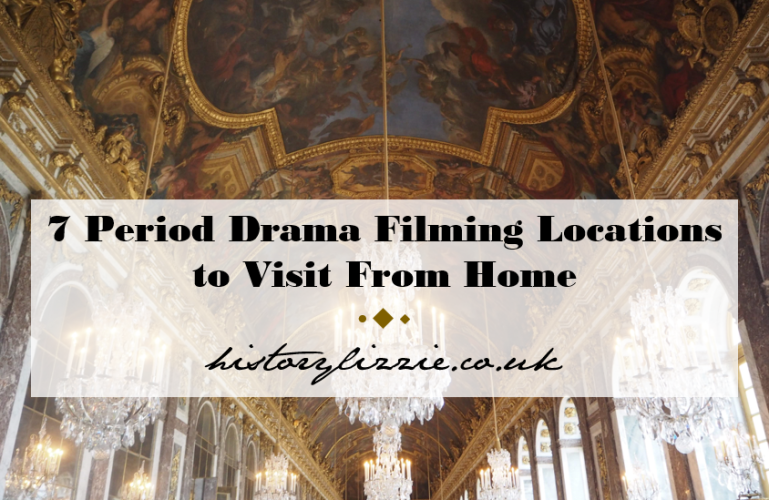 I don’t know about you, but I love visiting any film location used for my favourite period dramas. And at the moment, as it’s safer to experience historical landmarks and museums from home, here’s another list of places you can explore through the fabulous Google Arts and Culture (and other sources) which were used in your favourite period drama films and series.

Although many other chateaux around France were used to show the unfinished Versailles in this costume drama, the Palace of Versailles was used. Louis XIV’s beautiful vision is available to you to wander around here.

Enjoy the Hall of Mirrors, where you can zoom in on the incredible ceiling by Charles Le Brun, which depicts the history of the first eighteen years of Louis XIV’s reign, beginning in 1661 and ending with the peace treaties of Nijmegen. Get up close and personal with many of the stunning artworks around the palace, and pretend you yourself are the Sun King, wandering around your creation.

Tess of the D’Urbervilles – Stonehenge

My heart breaks every time for Tess Durbeyfield when she awakes with Angel Clare upon an altar at Stonehenge to see the police waiting to arrest her for the murder of her tormentor Alec D’Urberville.

The Neolithic and Bronze Age stone circle can be explored fully via English Heritage’s brilliant 360-degree tour here – not only this, but you can also watch a live feed of the skyscape above Stonehenge here.

The important story of Alan Turing and the group of codebreakers that worked upon cracking the Enigma machine was brought to life through filming at Bletchley Park, where cryptanalysts worked during the Second World War.

Explore the outside of this incredible and historic place here. Codebreaking at Bletchley was first tested in September 1938, a year before the war began. The Enigma machine and the ‘Red’ key used by the Luftwaffe were broken here, as were Japanese and Italian systems of code.

I was obsessed with the adaptation of Persuasion with Sally Hawkins and Rupert Penry-Jones as Anne Elliot and Captain Wentworth respectively when it came out. This was probably because Persuasion has my favourite passage from Jane Austen ever in it… the letter from Captain Wentworth when he tells Anne:

You pierce my soul. I am half agony, half hope.

Lots of filming was done for this version on the Royal Crescent in Bath, which is such a stunning row of Georgian houses you’ll wander along via this walk through here and feel like you are stepping straight into a Jane Austen novel.

This film adaptation, exploring the life of Dido Elizabeth Belle Lindsay, daughter of an enslaved woman, Maria Belle, and naval officer Sir John Lindsay, and her ambiguous social position, is one of my favourites. Belle was entrusted to the care of her father’s uncle and aunt, the 1st Earl and Countess of Mansfield, and was brought up alongside her second cousin, Lady Elizabeth Murray.

Whilst this is a fictionalised version of Belle’s life, Belle did grow up in the beautiful Kenwood House in Hampstead Heath. I am cheating a little here as well, because Kenwood was not actually used during the filming of Belle because of restoration work going on there at the time – Chiswick Park, Syon House and Osterley Park were all used instead.

But Kenwood House is available to explore – learn about the fascinating art here, and take a trip around the outside, as well as a walk through the interior in the footsteps of the real Belle, here.

A Room with a View – Florence

The Florence explored by Lucy in the companionship of several amusing characters is one that can be fully explored from home. Take a walk around the beautiful city, marvelling at the Arno, the Ponte Vecchio and the rest of the historic centre here.

The Tin Coastline in Cornwall and West Devon is used for a variety of Poldark filming locations, and you can take a walk along and admire the beautiful views. You’ll be able to spot the remnants of the famous tin mines, including the location of Wheal Leisure, owned by Ross Poldark (which can be found at Botallack Mine).

Levant Mine was used as Tressider’s Rolling Mill in the series, and you can get up close to the mine here to have a good look at it – don’t forget to take in the stunning views of the sea beyond it.

I hope you have fun on these virtual tours of period drama locations – if you know of any others, drop them in the comments below for others to enjoy too!