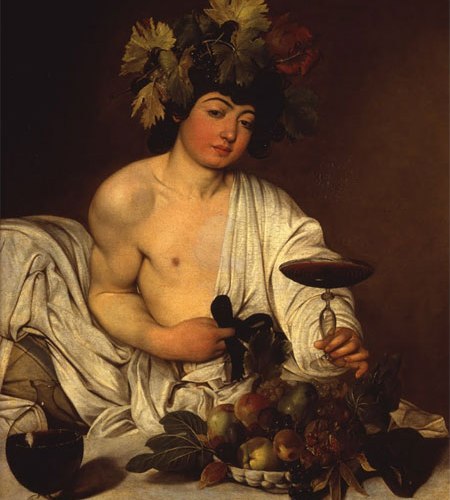 I really enjoyed reading a bit more about the Baroque last week and the week before when I was thinking about Bernini, so I thought, who better a Baroque artist than Caravaggio? Though sometimes it is a contentious point between art historians whether or not he was a Baroque artist, I think he fits the bill. Baroque was initially an intentionally derogatory term for art that was seen to deviate from the norm of the Renaissance classicists; it began with mid-eighteenth century art historians such as Winckelmann (1717-1768). However, now it is used to describe art of the seventeenth century which encompasses a dynamic energy and decorative richness. It is, as I mentioned in my post on Bernini, particularly associated in Italian and Spanish art with the Counter-Reformation of the Catholic Church. So where does Caravaggio – the original cultural figure who was mad, bad and dangerous to know – fit into this?

I really love Caravaggio’s Bacchus, so that’s what I’m going to use here to prove his Baroque associations. It was painted during 1597-1598, and was commissioned by Caravaggio’s influential patron Cardinal del Monte as a gift for Ferdinand I, the Grand Duke of Tuscany. It is one of his most famous early works, but interestingly was not mentioned in the writings of his contemporaries or early art historians because it wasn’t discovered until the early twentieth century in the storerooms at Florence’s Uffizi gallery, where it is on display. It appears quite risqué, and this may be why it was hidden away, with the intention of only viewing in private. Bacchus, the Roman God of Wine, Madness and Ecstasy, is shown as a hazy-eyed, sensual Italian teenager. Perhaps it was too much sensuality to handle during the Counter-Reformation!

Caravaggio has a very naturalistic style, which almost seems a stylistic continuation of the classicism of the Renaissance, but there is something dramatically new about it. The exaggerated use of light and shade is almost a trademark of Caravaggio’s work – if you are in Rome and happen to walk into the Church of Santa Maria del Popolo, you’ll see this in his Crucifixion of St Peter. The drape of the white cloth and the pallor of Bacchus’ fleshy skin almost seem to glow by comparison to the dark backdrop. Besides being a key feature of Caravaggio’s painting, this is also a key feature of Baroque painting. It is also different because the artist’s focus is solely on the character portrayed and his humanity; there is a lack of landscape that makes this a portrait with the essence of still life in the fruits and flowers before the Roman God, and the wine proffered to the audience invitingly.

Why was Bacchus a key figure to paint at this time? Why did Caravaggio choose this subject? Bacchus was popular in artistic circles in Rome and became part of new ideas and subject matter that challenged the excessive mannerism of the late sixteenth century. (Mannerism sat between the Renaissance and Baroque, and the characteristic things to spot are long sinuous lines, such as women painted with long necks, limbs and elegant S-shaped bodies – Bronzino’s Allegory of Venus and Cupid in the National Gallery is an example of this, but more on that another time).

Caravaggio put his own spin on this popular subject, of course. He used humble models and insistent realism – if you look closely, you can see dirt under the teenager’s fingernails, which contrasts deeply with the antique wine glass he is holding. Something I think is really interesting that was pointed out by Andrew Graham-Dixon (a key writer on Caravaggio!) is that the exquisite wine glass appears probably influenced by those in the collection of Cardinal del Monte, his patron. Graham-Dixon wrote “Caravaggio was always highly responsive to circumstance and milieu. Throughout his life, his art would be coloured by the different social, political and religious environments he encountered.” Caravaggio certainly lived a colourful existence. Being accepted into del Monte’s circle in 1595 had irrevocably changed the young artist’s fortunes – he moved to Rome in 1592, and spent his first few years there selling pictures of still life objects and half-length figures on the street. But with the Cardinal came public commissions, and his popularity grew exponentially. He was violent, spontaneous and tempestuous, and famously killed a man in 1606 in an argument over a game of tennis. He died in 1610, abandoned on the Italian coastline. His art certainly reflect the dramatics he lived and breathed, screaming of the baroque.

Here, Caravaggio shows us a Roman God who is a man of the people, gazing lazily and drunkenly out at the viewer. He is humble and real, and intensely colourful, the artist having been influenced by Lombard (he was from the town of Caravaggio in Lombardy, hence his name; his real name was Michelangelo di Merisi) and Venetian painters. The homoerotic intoxicated presentation of Bacchus can also be seen a hundred years earlier, in the Michelangelo’s marble sculpture for Cardinal Riario, which has an unstable posture, glass proffered and a fleshy body akin to the teenager in Caravaggio’s vision. A popular image that stood the test of time, movement and medium, Caravaggio offers an early image of baroque sensibilities that I think entices the viewer as much as a real glass of wine would!

2 thoughts on “Caravaggio and the God of Wine” 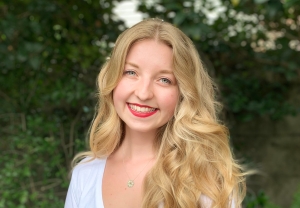