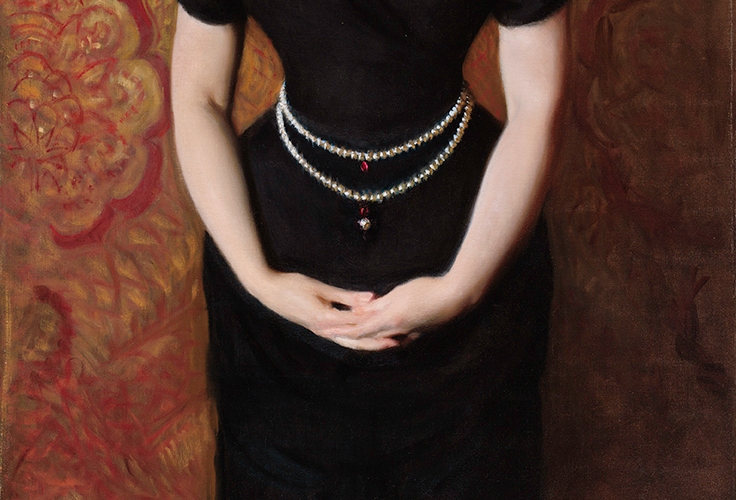 Above the central portal to the Isabella Stewart Gardner museum is her motto:

This sums up perfectly the collection housed at Fenway Court: a unique and beautiful museum created by a unique individual, who declared that when she died, it should be left:

“for the education and enjoyment of the public forever”

Last year I was lucky enough to visit Isabella’s wonderful museum and it made me want to learn more about her as a collector, and a female one at that, who created almost her own cultural centre and pulled into her circle a wide range of interesting artistic and intellectual people, summarised through an array of beautiful objects.

Isabella was born Isabella Stewart in 1840, in New York City. Her education was a combination of private tutors, a private school in New York and then a finishing school in Paris, between the ages of sixteen and eighteen. It was during these years at finishing school that she accompanied her parents on a visit to Italy, which seems to have sparked her love for the art and architecture of the Renaissance. In particular, a certain visit in Milan seemed to capture her imagination for the rest of her life. It was there that she visited the collection of Gian Giacomo Poldi Pezzoli, who had, alongside creating his own museum, started a foundation so that the museum could be maintained permanently for public use. His collection was wide-ranging, including ancient ceramics and bronzes, books and manuscripts, tapestries and paintings by masters across the Renaissance. These objects were all housed in rooms that Poldi Pezzoli had designed to evoke certain historical periods: something Isabella certainly did with her own museum.

The significance of the visit to Poldi Pezzoli’s collection was hinted at by a comment from Isabella’s friend Ida Agassiz Higginson to her in 1923, the year before her death:

“You said to me… that if you ever inherited any money that it was yours to dispose of, you would have a house… like the one in Milan filled with beautiful pictures and objects of art, for people to come and enjoy. And you have carried out the dream of your youth.”

On April 10th 1860, Isabella married John (Jack) Gardner, from Boston. They formed a lifelong partnership, but one that was marred by loss. The couple waited three years for the birth of their son Jackie, who died before his second birthday. Following this, Isabella suffered a miscarriage, and was advised by doctors not to have any more children. This caused her to fall into a deep depression, so her husband took her to Europe for a change of scenery and to improve her health. In 1867 they travelled across Scandinavia, Russia, Vienna and Paris. Her first collection was begun in Paris, where she met the dress designer Charles Frederick Worth, and began to collect his beautiful dresses. Isabella and Jack’s travels saw them visiting art galleries and concerts, awakening her interests in cultural activity. Her return to Boston saw her reinvention as a leader of culture and fashion, and set her further on her path towards her museum.

This was not the only travel Jack and Isabella undertook together. On later trips, they went to Egypt, Palestine, Athens, Munich, Nuremberg, Japan, Cambodia, Indonesia, China, India and Venice, where she spent five weeks studying the art and collecting photos of the works she found there. They also returned to Paris and Vienna, amongst other places, multiple times. It seemed that travel restored Isabella, allowing her to learn more about the arts that she was so interested in and enabling her to form her collections.

In 1875, Jack’s widowed brother died, which saw Isabella and Jack begin to look after their three nephews. Isabella was dedicated to their education, and the couple took them travelling too. The lessons taught to her nephews challenged Isabella to want to learn more, so she began to attend art history classes at Harvard University, taught by Professor Charles Eliot Norton. He encouraged her to begin a collection of rare books and manuscripts. This was not the only fruitful relationship Isabella had. Through her friendship with F. Marion Crawford, she was introduced to Dante. Isabella and Jack had long had friendships with artists, musicians and writers. Her circle included a friendship with John Singer Sargent, Bernard Berenson, James McNeill Whistler, Henry and William James, Julia Ward Howe and Dame Nellie Melba.

Isabella’s plans for her museum truly sprung into action upon the unexpected and sudden death of Jack in 1898. She channelled her grief through commissioning an architect to build a museum to the designs she and Jack had decided upon. This meant using stones they had collected and bought in Venice, creating a space out of the city that had so inspired her. In her own right, she had become a collector of great art by the late 1880s and, when her father passed away in 1891, he left her an inheritance by which she could fund the collection herself – her ambition, as described by Ida Agassiz Higginson. Her museum opened in 1903 and, over the course of the rest of her life, she continued to add objects to the quirkily designed rooms.

Isabella’s collection reflects her lifelong love affair with art and desire to learn more about it. It reflects her personality, including her friendships and losses, and shows a unique woman who defied nineteenth century gender conventions to be a cultural figure in her own right. Her control over her own space in her museum did not end with her death in 1924: she stipulated in her will that everything had to stay exactly where she put it, including not adding anything to the object she had assembled.

Her influence was recognised at the time, and still endures: she was aptly summarised by an 1875 anonymous reporter as:

“Mrs. Jack Gardner is one of the seven wonders of Boston. There is nobody like her in any city in this country. She is a millionaire Bohemienne. She is eccentric, and she has the courage of eccentricity. She is the leader of the smart set, but she often leads where none dare follow… She imitates nobody; everything she does is novel and original.”