A Venetian Palazzo in Boston: the Isabella Stewart Gardner Museum

A museum created out of the pursuit of pleasure and left behind for public enjoyment and education. Isabella Stewart Gardner’s Museum in Boston is a really unique and wonderful place which arguably, almost a century since she died, Isabella still exerts a certain control over. When she left the museum behind, along with an endowment to support its operation, she added the conditions that nothing should ever be added to or sold from the collection, as well as that installation should always remain the same. Though there is a new gallery which has enabled the museum to showcase contemporary work and have artists in residency, this does not detract from Isabella’s creation. I was lucky enough to visit last Autumn and, following on from my previous post about Isabella and her huge appetite for learning and collecting, I wanted to show some of my highlights of the museum, the interesting spaces and fascinating collection. 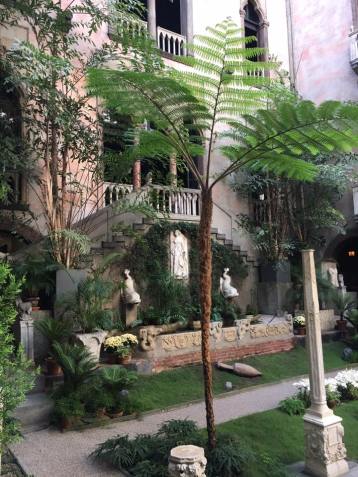 I don’t think I could start this without mentioning the beautiful courtyard at the centre of Fenway Court, and the surrounding cloisters. It is here that you step through and for a moment can imagine being in a true Venetian palazzo, not at the heart of busy Boston. And in fact, you are surrounded by pieces of Venice. During a trip there in 1897, Isabella and her husband Jack acquired many of the decorative and architectural sections of the courtyard, with the intention of bringing the essence of this special place in their minds to Boston. And, I can’t leave the courtyard without mentioning the sarcophagus at the corner. Known as either the Farnese Sarcophagus or Sarcophagus with Maenads and Satyrs Gathering Grapes, it is dated to 222-235 A.D. and is from ancient Rome. As the alternative name suggests, it has been at both the Villa Farnesina (of Raphael’s fresco fame) and Palazzo Farnese in Rome. 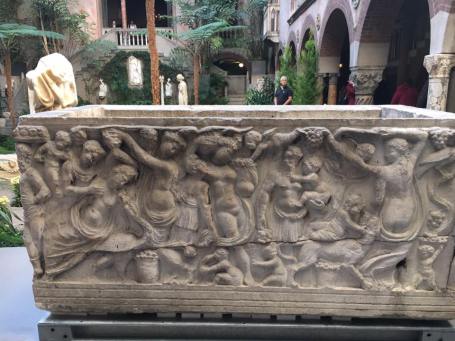 Surrounding this beautiful space are a multitude of rooms on the ground floor to be explored. The Blue Room is filled with many of Isabella’s contemporaries: here you’ll find Sargent (as well as in other spaces around the museum!) and one of my favourites, Manet’s portrait of his mother, Mme Auguste Manet, executed in 1862. Manet is one of my favourite artists of all time and I really liked how the dark background, which seems to blend seamlessly with Madame Manet’s dress, emphasises her face and elegant hands.

Nearby to these rooms is the Spanish Chapel, which has a Tomb of a Knight in it – which to me recalled visits to Cathedrals and the tombs around the side aisles. Above the altar is a painting by Francisco de Zurbarán entitled The Virgin of Mercy. I really liked this painting – the golden light in it was incredibly beautiful. Owing to Isabella keeping detailed records about her purchases, it is known that this was bought by her in Seville on April 23rd 1888. 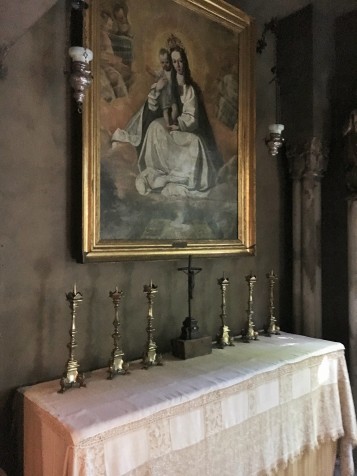 Having been impressed by downstairs, going to the second and third floors basically blew my mind – exacerbated by the fact that two of my other favourite artists, Titian and Raphael, even had rooms named after them. Isabella was the first American to bring Raphael to America. Three of his works are in the museum (two in this room and one drawing in the Short Gallery), and though there are other Renaissance masters on show alongside him (Botticelli, for one), it is Raphael who shines here. I really enjoyed the portrait of Count Tommaso Inghirami, executed c.1515-16, just after he painted the portrait of Baldassare Castiglione (found in the Louvre), which is widely seen to have redefined the conventions of western portrait painting. I like the no-frills portrayal of Count Tommaso, who was librarian to Pope Julius II. The fact that Isabella was the first collector to bring this Renaissance great to the U. S. is significant as well, shown in her handwritten catalogue of her collection. Written in 1917, The Paintings of Fenway Court had only one long entry on a painting: and it was for this one. Isabella purchased it through Bernard Berenson in March 1898, and paid a hefty $15,000 for it.

From here, I can’t avoid discussing the Dutch Room, on the same floor. There is a beautiful Rembrandt self-portrait in here (in it, the artist is twenty-three years of age – something we had in common at time of visiting!) but the room also reminds visitors of something the museum is very famous for: the 1990 art theft. It happened during the early hours of the morning on March 18th, when a pair of thieves, who were disguised as police officers, managed to enter the building and tied up the two security guards on duty in the museum basement. In less than an hour and a half, they stole thirteen works by Rembrandt, Vermeer, Manet and Degas. Six of these stolen works were from the Dutch Room, including Rembrandt’s only known seascape Christ in the Storm of the Sea of Galilee, which is worth around $500million. When they were stolen, the pictures were removed from their frames and they were left behind. The investigation is ongoing, with various theories and leads having been pursued in the intervening almost three decades, but not one of the works stolen has been recovered yet. What is really interesting in the museum is – sticking to Isabella’s rule of not changing the installation of the rooms – that the empty frames have been left on the wall, allowing visitors to imagine the stolen works and really think about what it means – and also hope for their return!

I couldn’t finish on anything but the Titian Room – the first thing I saw when I walked in was his 1562 Rape of Europa, commissioned by Philip II of Spain for his Poesie series (I previously wrote on this when visiting the Prado in Madrid – see here).

Another painting Isabella purchased through Bernard Berenson, it was bought from London art dealers Colnaghi & Co in June 1896 for £20,000. Inspired by Ovid’s Metamorphoses, it tells the story of how Jupiter, in love with Europa, transforms himself into a bull to try and lure her away to the ocean so that she can be his. Isabella was passionate about this painting and, when it came to her in Boston, she wrote to Berenson that

The surroundings for the painting are beautiful, with the red wallpaper emphasising the red veil Europa waves in the painting to attract the attention of her companions. There is also a beautiful view out into the courtyard from this room.

Overall, visiting the museum is very much an experience – and there are many spaces I haven’t had chance to describe here, such as the Long Gallery, Chapel and Tapestry Room, to name a few. There are quirky spaces full of wonderful objects, bearing testimony to the passion of a great collector.

Things I tell myself are “vital” before hoovering the house ready for visitors: making infinite (novice) flower arrangements 💐 also please enjoy the reflection of @robgilbertuk’s aeroplane poster he is so proud of!
Pretending it’s not a million degrees outside and that I don’t have approximately thirty mosquito bites en route to wine time 🥂 (basically an excuse to show off my new @oliveandsiena earrings which I’ve been surgically attached to since they arrived a week ago) 🤍
Charlotte in Charlottesville 🖌
2022 and 2017… almost exactly five years apart. When I spent a summer as a museum intern in Virginia, I would never have predicted that five years later I’d be living in the US (and that I’d make @robgilbertuk drive with me across three states for a weekend trip and think that was a very acceptable distance). If nothing else, this proves I can tan a slight bit. And it was lovely to revisit Maymont and retrace my steps 🌿
Cataloguing but simultaneously thinking about how to pick the right lottery numbers so I can buy a house full of antiques 🏠
Pastel dreaminess at the @wallacemuseum…