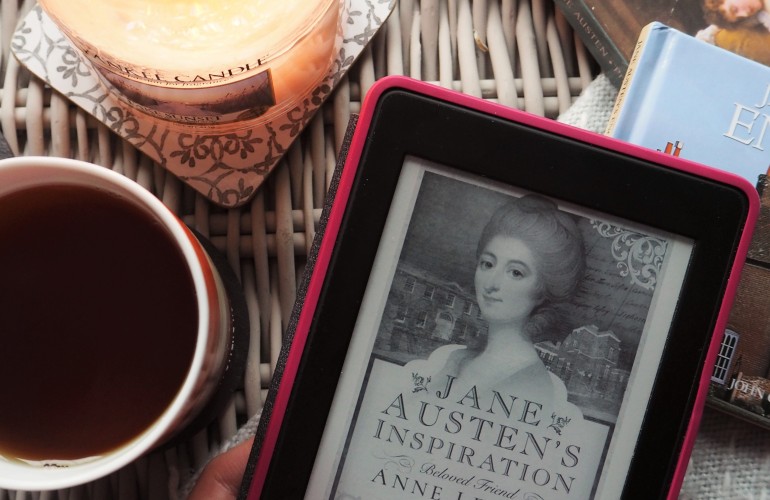 I’ve been lucky enough to start working with the lovely people at Pen and Sword books in reviewing history books – and could my first choice be anything but Jane Austen themed?

Judith Stove’s “Jane Austen’s Inspiration: Beloved Friend Anne Lefroy” looks to Jane’s close friend (and aunt to the famous love interest of Jane’s, Tom Lefroy), exploring their relationship and Anne’s life: family, writing and exploring the word Anne inhabited. And, thankfully, Stove barely dwells on the Tom Lefroy connection: I was worried the whole friendship between Jane and Anne would be cast through this, but it wasn’t at all. Tom was mentioned at the beginning, but as the book continues, he is left alone and what is presented is how two women formed a friendship through shared interests and a shared locale.

Stove begins with the 1808 poem Jane wrote in memory of Anne, who tragically and suddenly died in 1804 after falling from a horse. The poem shows how bereft Jane was at the loss of Anne, despite Anne being quite a lot older than Jane. Jane penned:

Angelic Woman! past my power to praise

Thy solid Worth, thy captivating Grace! –

Thou friend & ornament of Humankind!

What I found really interesting about Stove’s book is that whilst Jane is important throughout, what you’ll actually find is a wide-sweeping history of Anne and her family, dipping into genealogy and family scandals as well as examining her writings. I wanted to pick out some fascinating snippets from the book that both show the incredible detail of Stove’s research and how interesting Anne was.

Firstly, Anne really enjoyed writing herself. Her brother, Samuel Brydges, wrote that she had

“an exquisite taste for poetry, and could almost repeat the chief English poets by heart, especially Milton, Pope, Collins, Gray, and the poetical passages of Shakespeare; and she composed great easy verses by herself with great facility.”

He also credited her conversation and her writing for influencing him in his early love for poetry. After she died, Anne’s son Christopher Edward actually collated some of her poems and published them privately. Stove delves into Anne’s poetical influences mentioned by Samuel which is really interesting to consider popular reading for women at the time and how they engaged with different writers. Stove analyses some of Anne’s work and I particularly enjoyed a poem she wrote for Samuel and her other brother John when they were at school in Canterbury in 1776, which covered funny things happening at home along with well wishes for them whilst they were away.

Secondly, Anne had a real preoccupation with health: sadly she lost siblings and three of her own children. Stove fills out Anne’s interest with the context of hospitals and medical care at the beginning of the nineteenth century, which is highly useful in understanding Anne’s particular fascination with smallpox and immunisation. She corresponded directly with Edward Jenner, who discovered cowpox inoculation could provide lifelong protection against smallpox and was determined to have as many people immunised as possible. She was sensible, realising that the injury and discomfort immunisation could bring to the arms of working people was impractical so built her work around the harvest, working with other local people to vaccinate many against smallpox.

The third thing I loved reading about Anne was her interest in education and schooling. Her husband, Reverend George Lefroy, looked to establish a school-house in the 1780s. Here Anne ran a Sunday school, which ran on Sunday afternoons and extended to weekday mornings. And whilst scripture and religion was important in her curriculum, she also taught them reading, writing and life skills: noting that she taught two boys how to knit stockings. Again, Stove provides great context about where Anne took her Sunday school model from, and thoroughly embeds the reader in Anne’s world.

Anne’s story is told through her words, the words of those around her and constantly with a feel for contemporary influences and ideas. I really enjoyed the connection to Jane Austen, but also the way Stove explored the local circle both Anne and Jane would have been part of in Hampshire.

If you really enjoy in depth historical storytelling with lots of context, this is a book for you: Stove’s research is extensive and incredibly detailed. Anne Lefroy and her family history is given life and she becomes a three-dimensional character in her own right. I am not sure I’m convinced that Anne was Jane Austen’s Inspiration, but she undoubtedly was a beloved and treasured friend. It is always interesting to read about figures, and particularly female figures, who are an important part of the lives of well-known historical figures who outshine their social circle: it makes these people more human, and you can understand their friendships and lives in a more intimate way.

Thank you to Pen and Sword books for gifting me a copy of “Jane Austen’s Inspiration: Beloved Friend Anne Lefroy”.