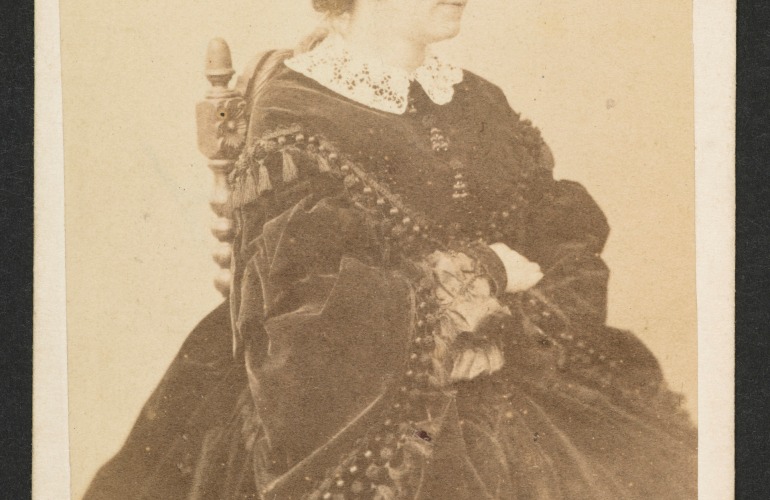 Today I wanted to write about a female figure in history who completely fascinates me: Lola Montez. I first heard about Lola Montez in a song (a fantastic song you can find here) by Volbeat, and after listening to it I went and read about Lola and her famous Spider Dance, and she was literally the queen of reinvention. Lola travelled all across Europe, to the US and Australia, married three times (two technically illegal), danced and influenced, lectured and wrote, and had a wildly interesting life in her forty years. So here are some of the crazy things that happened to Lola and what she did – you can really “feel the fire where she walked”, as Volbeat sang…

Lola was actually born Elizabeth Rosanna Gilbert in Ireland on February 17th 1821. She travelled with her parents to India, but returned back to the British Isles when she was four years old after her father died and her mother remarried. Her mother came back for her in 1837. By now, Eliza was sixteen and a recognised beauty, and the intention was for her to travel back to India with her mother in order to marry. Yet Eliza got there before her mother could: she eloped to Ireland with the thirty-year-old Lieutenant Thomas James – her mother had actually met Thomas on the ship back from India to collect Eliza. Eliza and Thomas were married outside Dublin on 23rd July 1837 and the newlyweds travelled to India the following year.

However, the marriage was short-lived and Eliza sailed alone back to England in October 1840. She wasn’t alone for long: on the ship from Calcutta, she began an affair with Lieutenant George Lennox. Her estranged husband soon found out and sued her for divorce, which was granted in December 1842, with a caveat: neither Eliza nor Thomas could remarry whilst the other was still alive.

Now saddled with the reputation of an adulterer, Eliza decided she would take to the stage. She travelled to Cadiz and learned Spanish dancing and the language, and here was where Lola Montez was born. In Spring 1843, Eliza came back to England with the new persona of a noble Spanish dancer, Lola Montez. She successfully debuted in a London theatre in June but was thrown out after accusations abounded that she was a fraud – Lola denied her Eliza Gilbert identity, and took to the continent.

In Germany, she performed for Friedrich Wilhelm IV and Tsar Nicholas I. A few highly public episodes in which she lashed out at the Chief of Police and others increased her notoriety and saw her deported to the Prussian border. If anything, this helped her dancing career: she became booked across eastern Europe.

Lola’s next move was to travel to France after befriending the composer Franz Liszt (she tried with Wagner, but he couldn’t stand her). Despite being unsuccessful as a dancer at the Paris Òpera, she began an affair and enjoyed Parisian high society. After her lover died, Lola caused more controversy in Baden-Baden after showing the public that she kept a knife in her garter, and moved to Munich in October 1846. Can you believe at this point, Lola was only twenty-five years old?

It was in Munich that Lola began to exercise serious political influence. King Ludwig I of Bavaria fell for her and she began to manipulate him to advance her own position, that of her supporters and get rid of her enemies. Though Ludwig adored her, the public hated her. Ludwig tried to keep her out of political matters but his recommendation to his cabinet that they make her a citizen (and a Countess) pushed things over the edge and they resigned in February 1847. Ludwig still made her a Countess, of Landsfeld, that August. The conferring of a title did not improve public opinion of Lola: her impact on government issues led to an angry mob pushing her out of Munich. She escaped to Switzerland and encouraged Ludwig to abdicate and join her. Ludwig did, but then realised how far Lola had tried to control and use him: he ended all contact with her.

After this episode, Lola returned to London and embarked upon her second marriage with a wealthy heir, Cornet George Trafford Heald, on 19th July 1849. Of course, this broke the terms of Lola’s divorce with her first husband, so she was prosecuted for bigamy. Lola and George went on the run in Europe before he abandoned her in Paris in the August of 1850.

Lola then travelled further than she ever had before: in December 1851, she landed in New York. Not only did she dance, but she also acted in a play about her time in Bavaria in the hope that it would persuade audiences she had behaved the way she did with Ludwig in order to bring about liberal reforms to Bavarian government. Here, Lola was super successful, and travelled to California to dance during the gold rush. In San Francisco, Lola made her third marriage to the newspaper editor Patrick Purdy Hull on July 2nd 1853. This was to be the shortest of her three marriages: they broke up only a couple of weeks afterwards.

Exhausted by all of Lola’s adventures already? Lola was too. She settled in a small town in the mountains of California and lived there for two years. Yet clearly this wasn’t enough: in June 1855, Lola once again left for new territory. This time, she went to Australia.

Of course, Lola did not stay put in Australia for too long. She returned to America and began a lecture tour. Unsurprisingly, one of the subjects she spoke about was heroines and strong-minded women of history: perhaps she saw parallels of herself in the women she spoke about. She did return to the British Isles once more to lecture and attempt to run a boarding house, but bankruptcy forced her back to New York. She died of pneumonia on 17th January 1861 after suffering a stroke the summer before, and was buried in Brooklyn under the name of Mrs Eliza Gilbert.

In her forty years, Lola (or Eliza), lived an extremely interesting life which showed her to be strong of character and to have an incredible ability to pick herself back up after every crazy episode. Volatile and clever, Lola knew how to look after herself, where to be, where to go and what to do. Yet she wasn’t completely mercenary in all her calculated moves: upon her death, she left word for Ludwig of Bavaria that she had died a good Christian and had never forgotten the friendship he had offered her.

Bruce Seymour’s article on Lola in the Oxford Dictionary of National Biography tells the full story, rather than just the edited highlights version here!